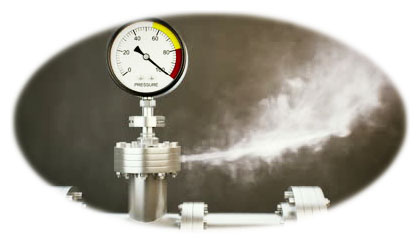 Since mechanical and thermal deformations are dangerous for the performance and operational reliability of the mechanical seal even when operating in the range of medium and high pressures, at their maximum possible values, the probability of failure increases significantly.


The weakest parts are carbon-ceramic sealing rings with reduced strength. In this case, it is preferable to use metallized coals, since they withstand high stresses, have an increased modulus of elasticity and a more favorable coefficient of thermal conductivity. This allows you to limit the mechanical and thermal deformation narrow limits. With large ring sizes, it should be borne in mind that their physico-mechanical properties deteriorate during the manufacturing process. With increasing contact width, temperature deformation and wear also increase. When hydrostatic unloading of the mechanical seal increases leakage and decreases the operational reliability of the mechanical seal due to the danger of severing the sealing surfaces.


Due to the low values ​​of the friction coefficient, hydrodynamic end seals have particularly proven themselves to work in the field of ultra high pressures. Of course, at high specific loads, materials of friction pairs impose special requirements, in particular, with regard to working capacity in emergency mode. It is preferable to use a pair of tungsten carbide / metallized carbon, and the contact surfaces should be polished and as well as possible lapped. Due to the low linear expansion coefficients of tungsten carbide and coal, temperature distortions also remain small. 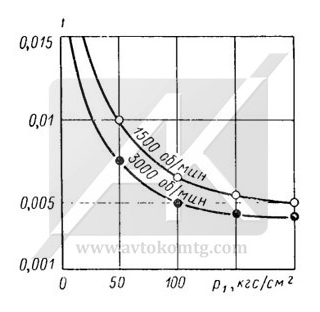 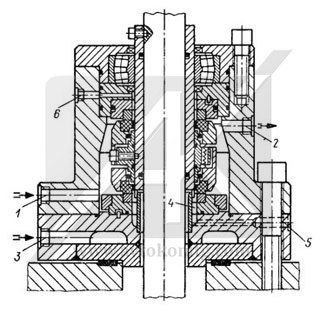 Picture 1 shows a graph of the change in the friction coefficient in the hydrodynamic compaction of ultra high pressure (p1 = 200 kgf/cm2) during sealing of water and sliding speeds of 5-10 m/s. The support and design of the counter-rim in this seal is reliable, therefore the axial load from the fluid pressure is distributed over a large area, which simultaneously improves the conditions for heat removal. Single-stage seals withstand pressures up to 250 kgf/cm2 (picture 2).


The hardness of the rings and the width of the gap when working in the range of ultra high pressures must be selected taking into account the values ​​given in picture 3. To prevent excessive narrowing of the sealing gap, it is recommended to use o-rings made of materials having a hardness 80° Shore, and protect them from being extruded with special support rings. When choosing the width of the gap, you must have in view of the change in linear dimensions in the operating mode under the action of mechanical and thermal factors. With increasing pressure of the sealed medium, it is necessary to increase the degree of its purity, reduce shaft beating and improve cooling.

For such high speed machines as pumps, compressors and turbines, special seals are needed. At speeds Vg slip up to 25 m/s in the mechanical seals can be applied rotatably mounted spacer springs and at speeds up to 35 m/s the same springs with guides. Due to the influence of centrifugal forces and the resulting impairments at higher speeds, the springs must be fixed. At high rotational frequencies, the principle of maintaining the lowest possible level of vibration and unbalance of rotating should be adhered to masses. Picture 4 shows a fixed mechanical seal of compressor with a floating intermediate ring. The compressor shaft rotates at a frequency of n = 11200 rpm. 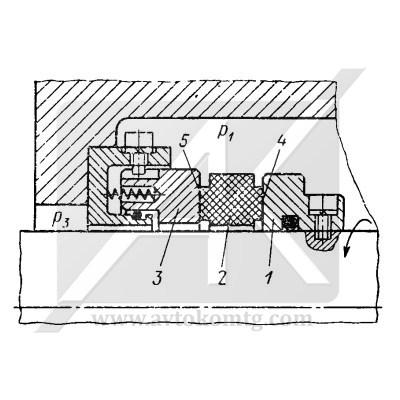 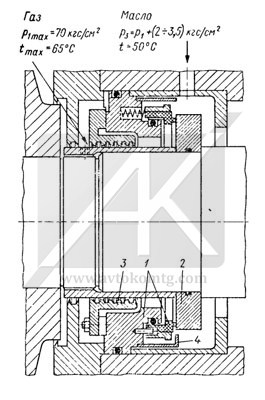 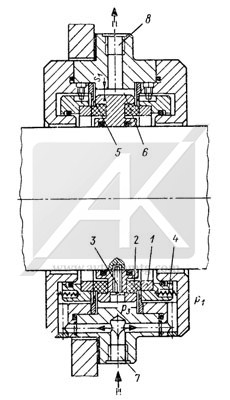 The gap between the shaft and the intermediate ring 2 is about 1 mm. However, the expected reduction in rotational speed as a result of using floating intermediate rings (the ring would reduce the slip speed half), not implemented. Yes, and theoretically it is possible only with equal cohesion and slip friction coefficients (practically the first in most cases is greater than the second). Stroboscopic studies have clearly confirmed this for the case of using several intermediate rings. The advantage of them, however, is to improve the removal of heat. If, for example, the surfaces forming the sealing gap No. 1 heat up during rotation (ring 2 is assumed to be stationary) to such an extent that the friction between them becomes greater than the adhesion in the fixed gap No. 2, then intermediate ring 2 also begins to rotate, while in the gap number 1 slip stops. Such periodic changes contribute to reliable operation of the seal at high temperatures, however, leakage increases.


Picture 5 shows a fixed seal of high speed shaft, which also has a very small contact width. The pressure of the lubricating and cooling-blocking oil p3 is 2-3.5 kgf/cm2 higher than the gas pressure p1 = 70 kgf/cm2. Unlike the single end seals shown in pictures 4 and 5, picture 6 shows a double-acting hydrodynamic seal operating at high speeds.

Despite the high concentricity and flatness of the rotating counter rings 2, it is advisable to make them easily wearing material, in this case coal, because break-in seals occur faster. When using oils as locking fluids, it is necessary that they have the lowest possible viscosity, gas solubility and coking tendency. At high operating temperatures of the sealing rings, the locking medium should evaporate as much as possible.


It is often impossible to do without synthetic media for example polyglycol. Cooling costs environments in high speed seals are quite large, around 50-100 l/min. It should be noted that the losses associated with turbulence in Taylor vortices, much more than with friction end surfaces. The height of the gap in space for turbulence 6 should be S1 = 7.5÷10 mm. With deviation from these values both sides usually increase sparging losses.


In the seal shown in picture 6, when using an oil with a viscosity of 3-4°C at 50°C, the power loss for sparging was about 20 hp. At high sliding speeds, additional foaming and gas dissolution in oil should be expected. Due to the large difference in densities of liquid and gas, its bubbles surround the seal, causing it to overheat and dry friction. When commissioning it is necessary to take care of good ventilation. The guide plates 5 increase the speed and make more favorable the direction of the flow of the locking medium, this allows to wash out the warmer and possibly gas-saturated annular volumes. In critical areas, the flow velocity should be increased to 10 m/s.

Along with ensuring sufficient mechanical strength, it is necessary to pay attention, in particular, to the thermal characteristics of materials in terms of optimal conditions for heat removal. The main danger for mechanical seals operating at high rotational speeds is the excess of permissible operating temperatures, at which the formation of deformation and cracks, as well as deposits in the form of scale and cracking products. It should also be remembered that with an increase in slip speed, leaks increase dramatically.

With an increase in operating temperature, wear and corrosion of the mechanical seals increase, and operational reliability decreases. Therefore, it is necessary to cool the end seals as well as possible and, in particular, to maintain the temperature in the sealing gap below the critical temperature of evaporation of the medium in order to avoid the occurrence of a dry friction mode. A double-acting hydrodynamic mechanical seal with a built-in double-flow pumping device, designed for a centrifuge with a solid drum in which only the counter-ring rotates, is designed so that it is also a double-flow pump impeller. The seal works in a centrifuge with a solid drum that removes solid particles from hexane with a temperature of 100°C. In order to avoid evaporation in the sealing gap, pure hexane is pumped into the heat exchanger by the pumping unit; thus, the seal is cooled with hexane, cooled to 30–40°C. At high operating temperatures, it is recommended to cool the sealing medium of the mechanical seal as rapidly as possible. This can be achieved by installing a pumping device with a heat exchanger into the seal using a cooling jacket or a cooling injection.


Usually, elastomeric materials are the weakest (in terms of thermal loads) elements of the mechanical seals, therefore the temperature in the sealing assembly must be kept as low as possible even when the apparatus is stopped, since there is a danger of blocking the node due to deposits that occur at high temperatures. If the working temperature in the sealing zone often exceeds the maximum allowable during long-term operation of polytetrafluoroethylene (about 250°C), then metal bellows are used in this case. 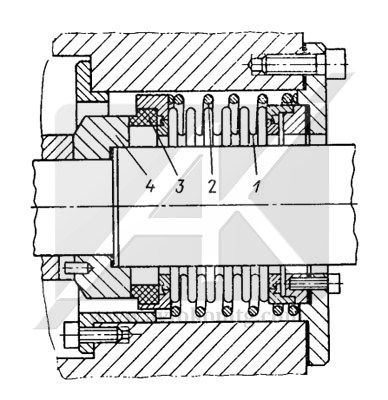 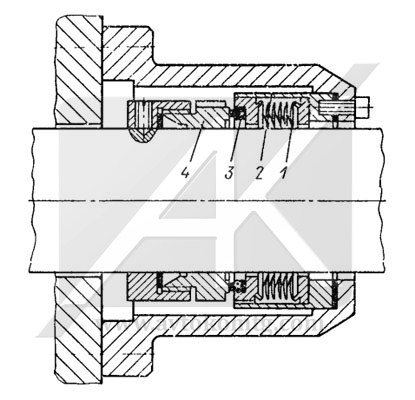 Picture 7 shows a seal with a high-grade steel bellows. After folding, the bellows is welded along the longitudinal seam. Due to the danger of fatigue fracture, metal bellows should be designed to be as immobile as possible, relieving them from torsional stresses by stopping (picture 7). Carbon slip rings are usually mounted on a press fit. Such seals with bellows with single walls can operate depending on the size and operating conditions at pressures up to 10 kgf/cm2 and temperatures of 400-500°C.

Nowadays, metal bellows with welded plates are increasingly used (picture 8). These bellows have smaller axial mounting dimensions, operate at higher compressive loads and have better damping properties. When using inconel and especially resistant to oxidation of coal, the working temperature can reach 650°C. Since carbon ceramic materials are characterized by very low coefficients of linear expansion, when using press fit, it is necessary to choose construction materials also with minimum values ​​of these coefficients, for example, a nickel-iron alloy with a nickel content of 42%.

Owing to embrittlement of many materials in the range of low temperatures it is necessary to choose them especially carefully. Elastomers can work normally only up to the temperature of -50°C. Therefore at a low temperature also often apply mechanical seals with metal bellow valves. As the structural materials working at a temperature up to -200°C use alloyed (chrome-molybdenum, chrome-nickel-molybdenum, nickel bearing, chromonickel) became, for example alloys of brands 6900 and 6903. Bolts for work at a low temperature need to be produced, at least from viscous alloy of brand 4541. Of course, it is necessary to take into account the behavior of the medium to be compacted at low temperatures, i.e. mainly liquefied gases. More detailed information about the gas parameters is contained in table 1. 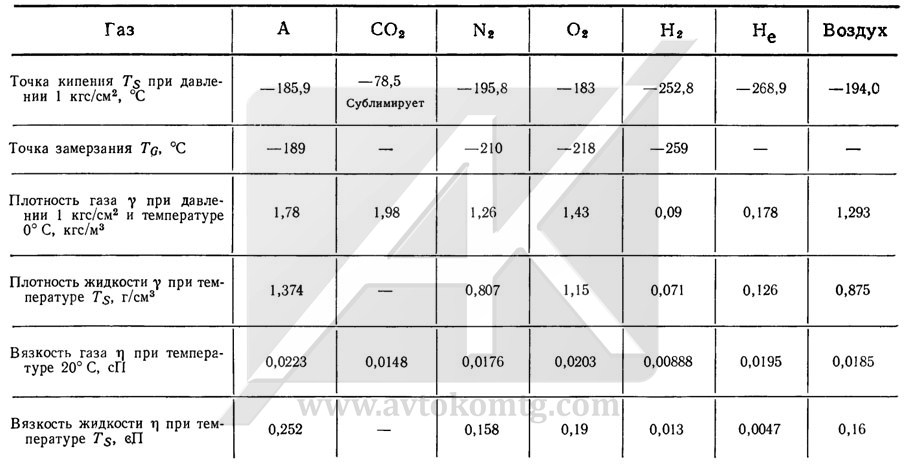 In view of the large temperature differences in the considered installations, when they are put into operation, it is necessary to choose appropriate materials to maintain the temperature deformations at a low level. In addition, it is necessary to prevent the access of atmospheric air to the seal so that it is not blocked due to the formation of ice. Picture 9 shows the mechanical seal for operation in a liquefied gas environment. 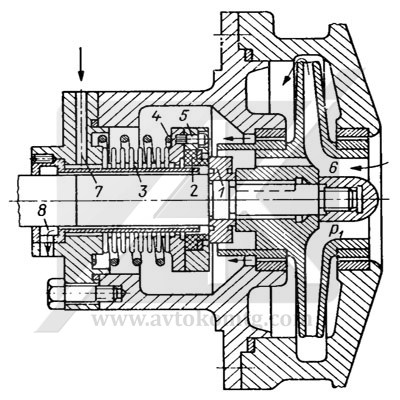 The durability of the materials of the sealing rings at low temperatures may change completely. If, for example, a very strong metal/coal vapor abrasion in the mode of absolutely dry friction (Vg = 10 m/s, Pg = 1.5 kgf/cm2) worked at over 4000 hours at room temperature, then, when it compressed liquid oxygen down after a few hours due to wear.


Until recently, the durability of mechanical seals sealing liquid oxygen at a pressure of Px = 30 kgf/cm2 and a speed of Vg = 13.7 m/s was 300-500 hours, but now with improved materials of a friction pair, it has grown more than 10 times. At oil refineries, when transferring liquefied gases (pentane, butane, ethylene, etc.), preference is given to end seals of double action. In this case, mono- and polyhydric alcohols (methyl, ethyl, ethylene glycol and glycerin) are used as locking media, for example, propyl alcohol can be used at temperatures up to -120°C.