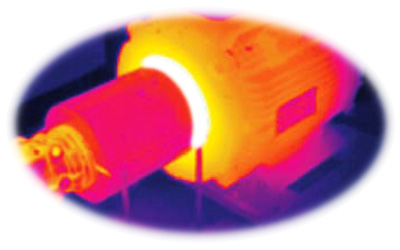 Unlike previously used glands, mechanical seals can fail instantly, for example, due to separation of sealing surfaces, destruction, cracking of friction surfaces from thermal stresses, with unacceptably high temperatures and their differences.

Due to the increased danger of poisonous explosive, flammable and radioactive media, as well as large costs required for their possible repairs, often causing downtime of entire installations, it is necessary to carefully check the inaccuracy and reliability of the selected mechanical seals.

The materials of friction pairs and the design of the mechanical seal must be chosen so that in the operating mode the temperature in the gap with a sufficient margin does not reach the critical evaporation temperature of the lubricant. During evaporation of the lubricant film, zones of dry friction, increased release of frictional heat, wear and failures due to thermal cracking, isolation of metals, reduction of wear resistance of metal pairs and combustion of plastics should be expected. The resulting temperatures may exceed the allowable for sealing materials or cause deformations in excess of the allowable for this design.

In the event of a sudden thermal load from thermal stresses, cracks, breakages and chipped rings may appear. Due to an unacceptable temperature change, hot or cold press seals may open up, and in addition, gaps beyond the allowable for radial sealing elements may increase, at the same time can be squeezed out under the influence of internal pressure. As already mentioned, cold and hot press landings in a fixed seal are particularly dangerous. In addition, seal blocking may occur due to differences in thermal expansion as the temperature rises or falls. High temperatures help with known circumstances of the appearance of deposits that reduce the performance of the seal.

The limits of applicability of mechanical seals, their operational reliability and durability significantly expand and increase if the following is applied: cooling of the sealed space; double acting seals with special cooling and locking lubricating fluids; constructions with pump effect and connection of high pressure heat exchangers. In addition, when choosing materials for friction pairs, it is necessary to take into account their performance in emergency mode, the lack of tendency to weld or adhere, a high thermal conductivity and sufficient crack resistance when exposed to thermal stresses. Sometimes it is possible to increase the evaporation temperature of the lubricant by using additives. For example, the mechanical seals of water pumps in car cooling systems made a whistling noise during relaxation vibrations of the end surfaces, which worked partly in the dry friction mode. These phenomena disappeared when a few drops of emulsion oil or glycerin were added to the cooling water. As a rule, the colder the seal is in operating mode, the higher the durability and operational reliability of the mechanical seal.

The dimensions of the parts of the seal should be set with sufficient reserves, especially when using press-masses of synthetic resins and coals, graphites and metal oxides that are sensitive to the concentration of stresses. When using these materials, it is necessary under any circumstances to avoid cross sections with sharp edges, as well as direct force effects with high local specific loads on the surface, arising when pressing in locking pins, etc.

Picture 1 shows some typical cases of fracture of the coal rings. Additional sources of danger can also be pulsating vibrations and hydraulic shocks.